With the goal of winning all 48 Lok Sabha seats in Maharashtra, the BJP launches "Mission 2024" 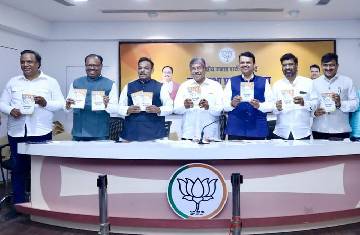 The Bharatiya Janata Party (BJP), which has been intensifying its criticism of the Shiv Sena-led Maha Vikas Aghadi administration, on Thursday unveiled "Mission 2024," a campaign to win all 48 Lok Sabha seats in Maharashtra. With a goal of winning all 48 seats, the party led by Prime Minister Narendra Modi's close confidant and former chief minister Devendra Fadnavis has started campaigning today. In the presence of BJP national secretary and former Maharashtra minister Vinod Tawde, "Mission 2024" was formally launched at the meeting today.
Fadnavis stated right away that the BJP would put forth all of its effort over the course of the next 18 months to increase its presence and engage the populace in order to win all 48 seats in the upcoming general elections. "We are concentrating on the electoral districts that we took in the 2019 election. However, we have also chosen a few of the new demographics that we hope to win over. In 48 constituencies, we'll fight hard. In 48 constituencies, we will be prepared, and we will try to win," he said.
A committee has been established to focus on poll strategy for all 48 seats, according to Fadnavis, who also stated that the party's strategy for the next 18 months was discussed in the meeting. Chandrasekhar Bavankule, a former minister, will be in charge of organising it. Fadnavis has already declared that the party's victory march will continue in the state council election scheduled for June 20 and later in the upcoming local and civic body elections, buoyed by the victories of three nominees in the Rajya Sabha election.
Fadnavis' announcement is significant because the BJP and Shiv Sena, who had been allies for over 25 years, broke off their alliance following the state assembly election in October 2019 because they had each run their own campaigns. However, the pair ran as a team in the Lok Sabha elections in May 2019 and, riding the Modi wave, took home 41 of the 48 seats. With 27.84 percent of the vote, the BJP won 23 seats, followed by Shiv Sena with 18 seats and 23.5 percent, NCP with 4 seats and 15.66 percent, Congress with 1 seat and 16.41 percent, and independent with 1 seat and 3.72 percent.
The BJP wants to capitalise on the eight years of Modi's leadership and the numerous development projects that were completed during that time. Furthermore, the party is committed to engaging voters by outlining the internal inconsistencies of the ruling Shiv Sena, NCP, and Congress. In addition, BJP wants to highlight the development agenda of the Modi government in contrast to the "misrule" of the MVA government.
Image Courtesy: Twitter @themaktab