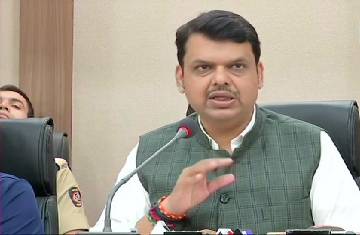 Devendra Fadnavis, the Deputy Chief Minister of Maharashtra, has criticised the late Uddhav Thackeray, alleging that it was his management style that caused the Shiv Sena to split. Additionally, he acknowledged that his "greatest" political error was believing senior Nationalist Congress Party (NCP) leader Ajit Pawar, and he said that it was crucial to live a long life in order to exact revenge for the backstabbing.
In a secret ceremony held at the Raj Bhavan in November of that year, Fadnavis and Pawar had taken their oaths as the state's Chief Minister and Deputy CM, respectively, following the results of the 2019 Assembly election. However, after Pawar resigned, their administration barely lasted for about 80 hours. At the CNN News18 Town Hall meeting on Saturday, Fadnavis said that only Uddhav Thackeray was to blame for the current political unrest in the state and that it was his management style that caused the Shiv Sena to split.
The Shiv Sena, NCP, and Congress-led Maha Vikas Aghadi (MVA) administration, which was led by Uddhav Thackeray, fell in the final week of June after Sena MLA Eknath Shinde and 39 other lawmakers rebelled against the party establishment. On June 30, Shinde took the oath of office as chief minister, while Fadnavis did likewise as his deputy.
"The political disaster and crisis in Maharashtra are solely Uddhav Thackeray's fault. The division inside the Shiva Sena is a result of his management style. Approximately 30 to 40 MLAs left the MVA coalition, and he was unaware of it "explained Fadnavis. "The mandate was mocked by Uddhav Thackeray. Prime Minister Narendra Modi and Home Minister Amit Shah always predicted that the CM will come from the BJP when we campaigned as an alliance. On stage, Uddhav Ji also applauded. However, when ambitions surpass capacity, people take action, "added Fadnavis.
"We had previously fought for Hindutva under the leadership of Balasaheb Thackeray (the founder of Sena), but now they refer to him as "janab" Balasaheb Thackeray and have published an Urdu calendar. The Shiv Sena has never engaged in this kind of appeasement "Added he.
Image Courtesy: Twitter @ANI