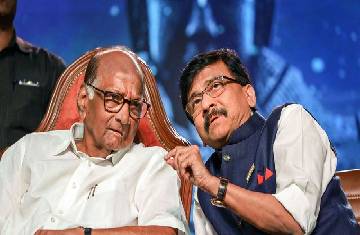 Days now since Shiv Sena's second nominee Sanjay Pawar was humiliated in the Rajya Sabha election, Nationalist Congress Party chief Sharad Pawar held a marathon meeting with party ministers and senior leaders on Monday to discuss the factors that led to MVA's major embarrassment and the precautions that three ruling partners must take to ensure the victory of its six nominees in the state council elections for ten seats scheduled for June 20.
Pawar, who previously stated that he was not surprised by the BJP winning three seats, expressed his strong displeasure with Shiv Sena MP Sanjay Raut's decision to name and shame a few independents for voting for the BJP and label them traitors. "Pawar was deeply dissatisfied with Raut's remarks against independents, which he claimed were unwarranted, especially since their votes were required in the state council election to ensure the victory of MVA's six nominees."
The NCP chief insisted on avoiding such statements and asked party ministers, as well as Shiv Sena and Congress ministers and leaders, to reach out to independents and smaller parties to ensure their support. Pawar was adamant that MVA could outwit the BJP with proper coordination. Pawar also told the ministers that the ruling parties should not waste time addressing various issues, such as allocating adequate funds raised by independents, smaller parties, and NCP, Shiv Sena, and Congress legislators.
To avoid resentment, MVA ministers led by Chief Minister Uddhav Thackeray should meet with legislators individually and address their grievances on a priority basis. The legislators must not be overlooked in order for the MVA government to complete its five-year term," said another minister. Furthermore, Pawar insisted that the three parties refrain from making statements against each other because the BJP is preparing to intensify its attack on the MVA government.
Image Courtesy: Twitter @msnindia