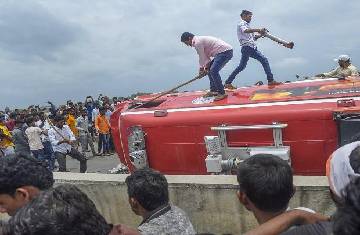 Protesting against the death of four farmers in the state of Uttar Pradesh, the Maha Vikas Aghadi (MVA) government called a state-wide Bandh, which could be seen in the city of Mumbai, which showcased Shiv Sena’s dominance and control in the city still. The decision of Maharashtra Bandh was called by all the three parties in the Maha Vikas Aghadi (MVA) coalition consisting of Shiv Sena, Congress and Nationalist Congress Party (NCP).
In the series of protests against the Bharatiya Janata Party (BJP) government in Uttar Pradesh, Congress and Nationalist Congress Party (NCP) leaders led out a protest rally but the Shiv Sena didn’t participate in it. “The decision for Maharashtra Bandh was jointly made by all the three parties but we were not aware of the rally led out by Congress and Nationalist Congress Party (NCP) and we believe that it was not a necessary rally as all the establishments had co-operated with the decision and had shut shops in support,” stated Mumbai Shiv Sena leader.
After the issue of Shiv Sena not joining the rally organized by Congress and Nationalist Congress Party (NCP) grew, speculations started to boil up of a rift in the Maha Vikas Aghadi (MVA) coalition government but denying this speculation Congress Chief Anil Kaushik stated that all the parties are together in the Maha Vikas Aghadi (MVA) coalition government, further he stated that not much should be read in the absence of Shiv Sena in the rally.
As per the traders of APMC, they were forcefully asked to shut down the shops as the local Maha Vikas Aghadi (MVA) government leaders were making rounds and keeping a check in the market and if the shops were opened, they were threatened. “We cannot oppose these bandhs as we need to continue doing business and this time the business is already down and now such bandhs hurt us even more,” stated trader.
Image Courtesy: Twitter @hashtagmumbaiband