Rajya Sabha Elections: According to Ajit Pawar, the Shiv Sena, NCP, and Congress may easily win one seat each in Maharashtra, while the BJP can win two 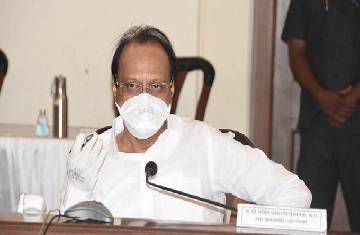 According to Maharashtra Deputy Chief Minister Ajit Pawar, the ruling Shiv Sena, NCP, and Congress may easily win one seat apiece in the upcoming Rajya Sabha elections, while the BJP can easily win two seats. According to the DyCM, NCP President Sharad Pawar and Chief Minister Uddhav Thackeray met recently and may have discussed the upcoming Rajya Sabha elections on June 10.
The Shiv Sena, for example, has already stated that it plans to run two candidates for the Upper House of Parliament. The state Congress stated on Wednesday that the alliance leaders will decide how many seats each of the three ruling parties will contest after negotiations. Ajit Pawar said on Thursday, "There are six seats available. If quotas are considered, the BJP can easily win two seats and still have some votes left over."
"One seat is available for the Shiv Sena. However, it has a large number of extra votes. The NCP has a good chance of winning one seat and has some extra votes. Depending on the quota, the Congress can win a seat and have a surplus of one to three votes "he added. Six Rajya Sabha members from Maharashtra have their terms expire on July 4: Piyush Goyal, Vinay Sahastrabuddhe, and Vikas Mahatme (all from the BJP), P Chidambaram (Congress), Praful Patel (NCP) and Sanjay Raut (Shiv Sena).
Candidates for all four parties have yet to be announced.
The electoral college Rajya Sabha elections, planned for June 10, are composed of the 288-member Maharashtra Legislative Assembly, with a candidate needing 42 votes to win a seat. The BJP currently has 106 MLAs in the state, with the Shiv Sena having 55, the NCP 53, the Congress 44, the Bahujan Vikas Aghadi-3, the Samajwadi Party, AIMIM, and Prahar Janshakti Party each having two, and the MNS, CPM, Peasants and Workers Party, Rashtriya Samaj Paksha, Swabhimani Party, Jansurajya Shakti There are 13 Independent legislators, with one vacant seat.
When asked why Governor Bhagat Singh Koshyari hasn't cleared the names of 12 MLCs who will be chosen from his quota, Ajit Pawar claimed the former speaks "positively" everytime they discuss the matter. "According to the legislation and the Constitution, he (the governor) has no time limit to make a judgement. When we ask him about naming the 12 MLCs at any event, he always responds positively, saying, "Will do it Ajit Ji, why are you worried?" "According to the NCP's leader.
Earlier in the day, the deputy chief minister formally launched the Sharad Krida Sanskrutik Pratishthan, a Pune-based organisation that organises bhajan competitions for inmates. "Today they began a 40-day trek. It was flagged from here. They'll visit 27 prisons and speak with convicts "Ajit Pawar praised the organisers and the home department for taking such bold measures.
Image Courtesy: Twitter @fpjindia