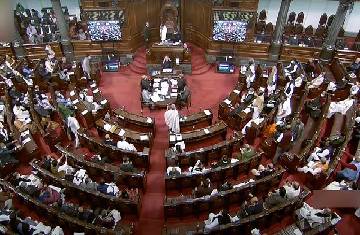 An MVA leader said on Wednesday that the ruling Maha Vikas Aghadi in Maharashtra will debate how many seats each alliance partner will compete in the upcoming elections to six Rajya Sabha seats from the state, as the polls are expected to test the Shiv Sena-led coalition's strength. The Shiv Sena has already stated that it will run two candidates for the Upper House of Parliament.
Six Rajya Sabha members from Maharashtra have their terms expire on July 4: Piyush Goyal, Vinay Sahastrabuddhe, and Vikas Mahatme (all from the BJP), P Chidambaram (Congress), Praful Patel (NCP) and Sanjay Raut (Shiv Sena). Candidates for all four parties have yet to be announced. The electoral college Rajya Sabha elections, planned for June 10, are composed of the 288-member Maharashtra Legislative Assembly, with a candidate needing 42 votes to win a seat.
On Wednesday, Congress spokesman Atul Londhe stated that the coalition leaders will decide how many seats each of the three ruling parties will contest after negotiations. A meeting of the three allies is scheduled soon, according to NCP spokesman Mahesh Tapase. Sanjay Raut, a spokesperson for the Shiv Sena, who is seeking two seats in the Rajya Sabha, claimed that their political opponents were horse-trading for the sixth seat, but claimed that the MVA has the arithmetic on its side to win the seat.
The MVA, which includes the Shiv Sena, the NCP, and the Congress, claimed to have the support of 170 legislators in the Maharashtra Assembly when it came to power in November 2019. Following the death of Shiv Sena MLA Ramesh Latke, one seat in the House is currently vacant. The NCP, led by Sharad Pawar, lost the Pandharpur by-election last year, lowering its vote total by one. The MVA is now dealing with several challenges, including the elimination of the OBC quota, central agency investigations into some Shiv Sena officials, and the imprisonment of two top NCP leaders for separate crimes.
Image Courtesy: Twitter @fpjindia