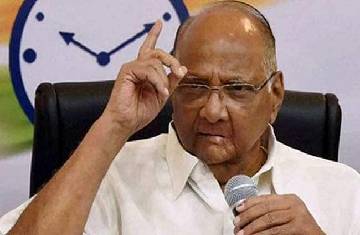 The decision on Maha Vikas Aghadi partners contesting upcoming local and civic body elections together will be made within a fortnight, according to NCP Chief Sharad Pawar, amid an ongoing war of words between ruling partners NCP and Congress over joining hands with BJP in Bhandara and Gondia Zilla Parishad polls in violation of alliance dharma.
Elections are scheduled for 20 Municipal Corporations, 25 Zilla Parishads and 210 Nagar Parishads, but the Supreme Court is anticipated to rule on May 17. In a special affidavit filed last week in the Supreme Court, the State Election Commission requested that it be allowed to complete the pre-election process by July, announce the poll schedule in September, hold civic body elections, including BrihanMumbai Municipal Corporation, in October, and local body polls in November.
The ruling and opposition parties are adamant that elections should not be held in the absence of the highest court's repeal of the 27 percent political quota for other backward classes in local and civic authorities. "State NCP president Jayant Patil would conduct talks with Shiv Sena and Congress partners about forming an alliance or running alone in the upcoming local and civic body elections. After that, the party will make a decision in a fortnight," Pawar added.
The approaching local and civic body elections have been dubbed a "Mini Assembly" election. The Maha Vikas Aghadi partners face a challenge from the BJP, which has spent the last seven and a half years expanding its wings despite losing power after erstwhile ally Shiv Sena established the government by forming an alliance with the NCP and Congress. Pawar, Chief Minister Uddhav Thackeray, state Congress legislature party leader Balasaheb Thorat, and Shiv Sena MP Sanjay Raut have recently declared on several forums that they (MVA partners) can defeat the BJP if they work together.
Image Courtesy: Twitter @ndtv