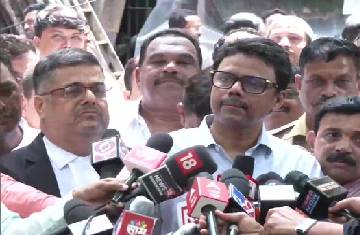 Days after Shiv Sena MP Sanjay Raut was detained and his wife Varsha was questioned in relation to the suspected money laundering in the Patra Chawl redevelopment case, Sunil Raut, the party's MLA, declared that he and his brother would not leave the Uddhav Thackeray-led Shiv Sena. He added, "We won't abandon Shiv Sena despite injustice done to our family.
Additionally, Raut stated that his brother, whose ED customary expires on August 8, will submit a new bail petition. Sanjay Raut, who used to talk without fear, has been caught up in the matter, according to Raut, who blamed the BJP for his brother's detention on the party's fear. Even if our family has experienced injustice, we won't leave the Shiv Sena.
As per normal, Sanjay Raut was taken for a checkup this morning. He is in good health. Shiv Sainik for Balasaheb Thackeray, Sanjay Raut, is paying attention to the party boss's ideas. He is ineligible to be crooked. But for the past 2.5 years, he has been forced to fight the BJP," said Raut. He stated that he was not afraid of it and said that he might also receive a summons from ED.
According to Raut, the case brought against Sanjay Raut was without merit. In reality, everyone is aware of the level of wealth that exists in Mumbai. However, he pointed out that the Patra Chawl case is being connected to our assets. Varsha Raut claimed, during a ten-hour interrogation by ED, "I have cooperated with the agency." I have responded to each question. I haven't been called back yet, unfortunately. We won't ever defect from the Shiv Sena under Uddhav Thackeray's leadership.
Image Courtesy: Twitter @fpjindia