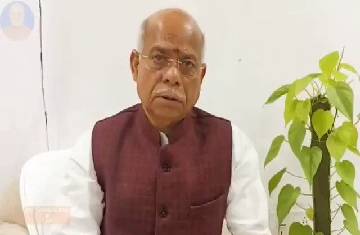 Shiv Pratap Shukla, a Rajya Sabha MP from the Bharatiya Janata Party (BJP), attacked the Shiv Sena on Sunday, stating that the Uddhav Thackeray-led party has strayed from the path of his father and founder Bal Thackeray. He was responding to Maharashtra Chief Minister Uddhav Thackeray's statement that "the BJP wears false Hindutva burkha, and our Hindutva is Gadadhari."
"There was a BJP party with us that wore a fake Hindutva burkha. We don't want a Hindu who rings ghanta in temples but teaches terrorists, according to Balasaheb Thackeray "Uddhav Thackeray stated at a rally. In an interview with ANI, Shukla stated, "What Uddhav Thackeray is referring to! He must consider the ideals that Balsahab Thackeray was recognised for. Is there even a trace of it in Uddhav Thackeray? If it is about blood, I believe he has dried up his blood solely to maintain control." In response to Maharashtra CM Rahul Bhat's inquiry on the killing of a Kashmiri Pandit, he said:
"The BJP would not read the Hanuman Chalisa anywhere. We don't understand why we have to travel everywhere and read the Hanuman Chalisa." "'Gadadhari' is our 'Hindutva.' What would you (BJP) do now that Rahul Bhat was slain by terrorists at the Tehsil office in J&K? Will you be reading the Hanuman Chalisa there?" Thackeray Shukla went on to bash Thackeray further, saying,
"The BJP never protected Dawood Ibrahim, but the Shiv Sena used to shield all Muslims and non-Muslim criminals since they had profited from them in some way. Shiv Sena has made the BMC the focal point for winning local body elections; if the BMC is eliminated, Uddhav Thackeray's back will snap." Dawood Ibrahim would be proclaimed a saint overnight if he joined the BJP, according to Maharashtra Chief Minister Devendra Fadnavis. "They (the BJP) can even offer Dawood Ibrahim the party ticket. The country's situation is quite hazardous. Those we elected and trusted are betraying us. Maharashtra did the greatest work during the pandemic "Thackeray stated in the
Image Courtesy: Twitter @ShivPShuklaOfc