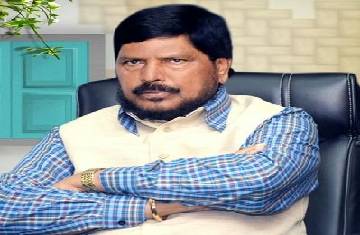 After former Maharashtra Chief Minister Uddhav Thackeray cited the dialogue from the movie "Pushpa," "jhukega nahi," shortly after the arrest of Shiv Sena MP Sanjay Raut by the Enforcement Directorate, Union Minister of Social Justice and Empowerment of India Ramdas Athawale responded appropriately, saying that Sanjay Raut is currently being investigated by the ED in the Patra Chawl scam case and he will have to follow the law.
After Shiv Sena MP Sanjay Raut was arrested and former Maharashtra Chief Minister Uddhav Thackeray accused the BJP of engaging in "vendetta politics," Union Minister of Social Justice and Empowerment of India Ramdas Athawale responded appropriately, claiming that the allegations are untrue.
The Union Minister said, "Allegations can be made against anyone, but there is absolutely no truth to the charge," in an exclusive interview with ANI today. The claim is unfounded. BJP is unrelated to this. "BJP does not believe in causing harm to anyone; if BJP is causing trouble, then it is your responsibility to provide evidence of this. You (Uddhav) should provide proof for these assertions. The ED investigation is unrelated to the BJP. ED has initiated an independent step, and as a result, ED determined that Sanjay Raut's detention was necessary.
The Enforcement Directorate is a separate agency, the BJP leader added. "ED is entitled to look into allegations of corruption or financial irregularities. If someone is detained by the ED, the accused person must explain how the allegation relates to him. He needs to provide proof in this regard. Party leader Uddhav Thackeray on Monday criticised the BJP for arresting Shiv Sena MP Sanjay Raut and said he was proud of him for not caving in to pressure.
Speaking to reporters, Thackeray referred to Raut, who had been detained by the ED in connection with a money laundering case, as a staunch supporter of Sena founder Bal Thackeray's Shiv Sainik movement. Sanjay Raut is someone I admire. What sort of crime did he commit? He is a journalist and a Shiv Sainik. Thackeray remarked that he is courageous and talks about what he does not agree with.
Image Courtesy: Twitter @RamdasAthawale