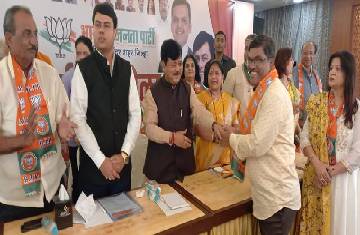 "It is for the Shiv Sena to visit Ayodhya for their unholy alliance with the Congress and NCP," said opposition leader Pravin Darekar at the BJP workers convention at the Maxus Banquet Hall. Darekar also spoke at a press conference with Mayor Jyotsna Hasnale and BJP city leader Adv. Ravi Vyas.
Darekar described BJP MP Brij Bhushan Sharan Singh's resistance to MNS president Raj Thackeray's travel to Ayodhya as a "personal decision," adding that the subject will be discussed by our leaders Chandrakant Patil and Devendra Fadnavis with Uttar Pradesh Chief Minister Yogi Adityanath. Darekar claimed that the Maha Vikas Aghadi (MVA) competitors will try to defeat each other, but that the BJP will succeed and stomp their opponents because of the three-member panel procedure in municipal elections.
"Any form of indiscipline or groupism would not be accepted," Darekar remarked, taking a serious note of the continuing tug-of-war in the local BJP unit in the twin towns. Notably, when former legislator Narendra Mehta and his supporters raised a banner of revolt against the nomination of Adv. Ravi Vyas as the local BJP unit's president last year, the party's local unit remains divided. The conclave had no corporators who belonged to the Mehta group.
Image Courtesy: Twitter @adv_ravivyas