Only by including the Congress party is a non-BJP front possible: Sharad Pawar 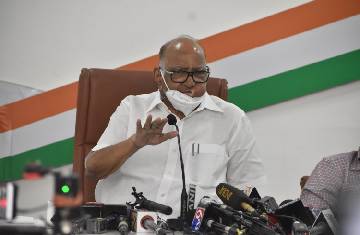 Sharad Pawar, the leader of the NCP, stated on Monday that the Congress party must be a part of the non-BJP front for it to succeed. In order to defeat the BJP in the upcoming general elections, Pawar has firmly stated that Congress will need to be a key component of the non-BJP front.
"Everyone wants to engage in a group activity. However, no preparation has yet been made in this area. Both Mamata Banerjee and Nitish Kumar met with me and shared their opinions. However, no decision has yet been made, according to Pawar. He cited remarks made by some leaders to the effect that Congress shouldn't be brought along. But, he continued, "I don't think one should take the position that nobody should accompany anyone. Thus, he reaffirmed that Congress will be an important ally in the imagined non-BJP front.
Nitish Kumar, Mamata Banerjee and K Chandrashekhar Rao have all argued persuasively for the inclusion of Planck as a formidable option to take on the BJP, hence Pawar's stance that the Congress party be included in the opposition front is significant.
Balasaheb Thackeray and Shivaji Park have been equated, according to Pawar. He recommended that the Shinde camp not protest the Shiv Sena's yearly gathering at Shivaji Park because the Shiv Sena has permission from MMRDA to stage its Dussehra rally at the BKC grounds.
Pawar's statement was made on the same day that the Thackeray group had already begun to promote posters for the anticipated Dussehra event that would take place in Shivaji Park. Additionally, it has started a forceful social media push for the same. The Thackeray group is waiting for the BMC to approve its application, and if it is denied, it is getting ready to go to court.
Image Courtesy: Twitter @PawarSpeaks