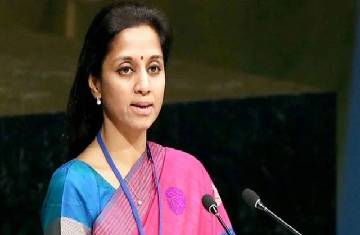 In a wordplay on the title of the well-known 1981 Bollywood film, Nationalist Congress Party (NCP) lawmaker Supriya Sule said on Tuesday that a Bharatiya Janata Party (BJP) MP had called the Eknath Shinde-led Maharashtra administration "Ek Duje Ke Liye." Sule's criticism is set against the backdrop of the prolonged cabinet expansion even one month after Shinde and the BJP's new administration took office. The sole members of the state government at this time are BJP Chief Minister Shinde and Deputy CM Devendra Fadnavis, albeit their portfolios have not yet been chosen.
"I recently spoke with a BJP Lok Sabha member who referred to the Maharashtra government as "Ek Duje Ke Liye." I never would have thought to make this analogy, "Sule, a Lok Sabha member for the Pune district's Baramati, added. Sule stated that Shinde and Fadnavis are in charge of the administration at a time when the state is dealing with a number of issues, such as the loss of crops due to excessive rainfall and the growing debt of farmers, among others.
The NCP leader recalled that "before (when the Maha Vikas Aghadi government was in office), there was a system of guardian minister for every district whom we used to contact and take support to handle a local issue." She claimed that the absence of ministers has left the new government in a state of uncertainty where even senior bureaucrats lack basic knowledge. Previously, the Shinde-Fadnavis administration was referred to by the Shiv Sena as being in an "Ek Duje Ke Liye" state of affairs. The government will soon be extended, according to Shinde, who was inaugurated as Chief Minister on June 30.
Image Courtesy: Twitter @Kreacher10