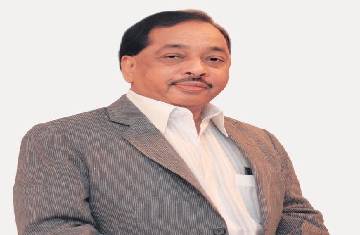 As the festive season begins, the opposition doesn't leave a point to attack the ruling party. Attacking the Shiv Sena, Bharatiya Janata Party's (BJP) Union Minister Narayan Rane alleged that the government was Anti-Hindu. This came after, Maharashtra Government imposed Covid 19 restrictions in the festive season. The Union Minister alleged that the Maha Vikas Aghadi (MVA) government, imposes restrictions only on Hindu festivals.
"Imposing restrictions amid the festive season is not a right step. This is an Anti-Hindu Government. Restrictions are imposed only at Hindu festivals. Whenever there is a festival except for the Hindu festival, there are no restrictions. The Chief Minister Uddhav Thackeray talks about Hindutva but his Hindutava ended the day he parted his ways with the Bharatiya Janata Party (BJP)," stated Union Minister Narayan Rane.
When asked about the recent notice which was issued by the Pune City Police to Union Minister Narayan Rane's wife and his sons, over an unpaid loan, he stated that he wasn't aware of any such information. "This information is not right, neither any notice was issued to us, nor do I have information about it. The loan was paid by us a long time ago of 25 crores. We also have asked the bank to inform us about the amount of interest. The date for the settlement is 16 October. We will be going to court against the ones trying to defame us," stated Union Minister Narayan Rane.
Restrictions amid the Ganesh Chaturthi festival were imposed by the Maharashtra Government to curb the spread of Covid 19 in the state, imposing restrictions on gatherings of more than five people. Other restrictions included only 10 fully-vaccinated people carrying Ganpati idols to the pandals, a ban on visits to the temple and a ban on idol immersion, with only popular mandals to be allowed to immerse Ganpati Idols in the sea.
Before the restrictions were imposed by the Government of Maharashtra, Chief Minister Uddhav Thackeray has requested the citizens and all political parties to avoid crowds during the festivities. Giving the example of Kerala, where it saw an immediate rise in Covid 19 cases after Onam. Chief Minister Uddhav Thackeray stated that the state will have to pay a huge price, if the crowds continue to rise at the time of celebrations in the Hindu festivals that started on 10 September