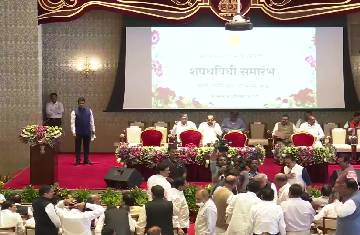 There is no longer any need to wait as Chief Minister Eknath Shinde, who has been leading a two-man government with his deputy Devendra Fadnavis since June 30, will increase the size of his cabinet on Tuesday. The swearing-in event will take place in the Raj Bhavan at 11 a.m. It is anticipated that fifteen ministers will be appointed, including eight from the BJP and seven from the Shinde camp. The following round of growth would happen later.
The names of the MLAs who would take the oath of office as ministers are being finalised, Shinde stated after arriving at the Nanded airport to survey the flood-affected districts in Nanded and Hingoli. You will gain knowledge. The final MLA selections will be made by tonight or tomorrow (Tuesday).
However, according to sources, the Shinde camp also includes parliamentarians Sada Sarvankar, Sanjay Shirsat, Pratap Sarnaik, Bharat Gogawale, and Deepak Kesarkar, as well as the ministers Dadaji Bhuse, Gulabrao Patil, Sandeepan Bhumre, Uday Samant, and Shambhuraj Desai.
According to BJP officials, Chandrakant Patil, Radhakrishna Vikhe-Patil, Sudhir Mungantiwar, Girish Mahajan, Suresh Khade, Atul Save, Mangalprabhat Lodha (the BJP's Mumbai unit chief), Ravindra Chavan, and Vijaykumar Gavit have been given the green light to join.
Chavan, who briefly served as the Devendra Fadnavis government's minister of state, was crucial in keeping the BJP and the Shinde camp in communication when Eknath Shinde and a group of 39 Shiv Sena lawmakers and 10 independents attempted a coup. He had resided with the dissident lawmakers in Goa and Guwahati.
Interestingly, former minister and potential ministerial candidate Ashish Shelar may have missed the boat because he is likely to be named the state's BJP president at a time when the party has launched Mission 45 to win as many seats as possible from Maharashtra in the upcoming Lok Sabha elections.
Image Courtesy: Twitter @ndtv