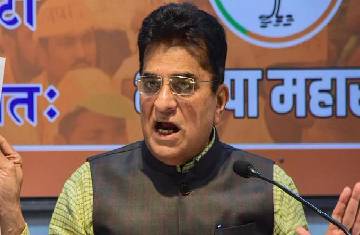 Professor Dr. Medha Kirit Somaiya, the wife of BJP politician Kirit Somaiya, has filed a case against Shiv Sena leader Sanjay Raut, alleging that the accused made hostile and unfounded allegations in the media against the complainant. Dr. Medha went to the Navghar Police Station in Mulund East, Mumbai, to register a case against Shiv Sena MP Sanjay Raut, who reportedly made defamatory remarks against her and his family.
"Sanjay Raut, the accused, is the Executive Editor of the Marathi newspaper "SAAMNA" and the chief spokesman for the Shivsena political party, according to me. I assert that the accused made malicious and unwarranted mischievous statements against me in the media on April 16, 2022 and that these statements were printed, published, and transmitted to the general public at large by electronic and print media. The slanderous accusations went viral on social media sites as well "In her complaint, she stated.
The accused's goal, according to the complainant, was to criminally intimidate and threaten her with an effort at character assassination without proof. "Dr. Medha Somaiya and Yuvak Pratishan are involved in a Rs 100 crore bathroom fraud, according to the accused Mr. Sanjay Raut's comments, which I came across. Dr. Medha and Somaiya Cha "Sambarkothi cha Sauchalaya Ghotala,"Economic Offence Wing of Police has begun planning for the probe of Dr. Medha Somaiya Yuvak Pratisthan's Rs 100 crore toilet scam" she continued.
Dr. Medha went on to say that Sanjay Raut's words were printed, published, and made viral on social media, causing her  considerable personal damage and harming her reputation and dignity. She encouraged the Senior Inspector to file an FIR against Sanjay Raut under sections 503, 506, and 509 of the Indian Penal Code (IPC) and to proceed against him in accordance with the law's procedures.
Earlier in the day, Shiv Sena leader Sanjay Raut claimed that an NGO operated by BJP politician Kirit Somaiya got crores of rupees in donations from corporations under investigation by the Enforcement Directorate. Raut stated that he will make an official complaint on the matter as soon as possible.
"Kamal ka Kirit! Kirit raises claims against a company in 2013-14, the company's CEO is investigated by the Enforcement Directorate in 2016, and Yuvak Pratishthan receives a HUGE contribution from the SAME company in 2018-19. Samjhiye aap Chronology! Isn't this a case for ED and EOW to look into? I'm going to register a complaint right away! "He wrote in a tweet
Image Courtesy: Twitter @fpjindia