The fractured mandate in the Brihanmumbai Municipal Corporation (BMC) polls could lead to strange bedfellows. Even as the Bharatiya Janata Party with 82 corporators is sending feelers, its estranged ally Shiv Sena which is the single-largest party with 84 members, is considering other options, including Congress that has 31 members in new House.
While the idea of Sena joining hands with Congress seems extremely implausible, both parties could help each other without coming together overtly. How? Congress could abstain during the voting thereby allowing Sena a working majority or putting up its own candidate. This will give the party the fig leaf that the so-called secular Congress didn’t join hands with Sena.
BJP is well aware of Sena’s moves and its own observers believe this could be a ploy by Sena which is trying to bargain hard. Former Chief Minister and Congress leader Prithviraj Chavan’s statement that ‘we are monitoring the situation closely’ has raised the anxieties of BJP leaders further.
BMC Commissioner Ajoy Mehta’s suggestion that a ‘secret ballot’ could be used for Mayoral elections has set the cat amongst pigeons as this will allow horse-trading of corporators given the extremely close contest.
Sources in the Sena insist the party leadership is no mood to relent. “If we go with the BJP again, it will damage us significantly and will allow BJP to further its base in Mumbai,” said a top leader. Sena may have emerged the single-largest party in Mumbai, but it is the surge in the BJP numbers that are too close for comfort for the Sena and which has got it thinking.
Three top Sena leaders confirmed Sena’s hobnobbing with Congress but refused to speak on record citing ‘sensitivity’ of the matter. Apart from the Congress, Sena is also working hard to get the support of small players such as Raj Thackeray-led Maharashtra Navnirman Sena and independents.
Two independent corporators joined the Shiv Sena on Friday, raising its tally in the BMC to 86, still way below the half-way mark of 114. Snehal More (Vikhroli) and Tulsidas Shinde (Dindoshi) had contested the civic polls as rebels after leaving the Sena.
More, former corporator from Vikhroli Parksite area, has also served as Vibhag Pramukh of Ghatkopar-Mankhurd area. Shinde was Shakha Pramukh from Dindoshi area in western suburbs.
Two other independent corporators — Changez Multani from Jogeshwari, and Kiran Landge from ward number 160 Kurla — have also declared their support to Shiv Sena.
For the Congress, it’s a big political decision to make, considering Sena’s hard Hindutva stance, which could cost them dear in the ongoing Uttar Pradesh polls, where the party is banking on Muslims to return to its fold. “Even an indirect gesture could cost us. We will wait till the UP polls are over and discuss this thoroughly at the highest level,” said a Congress leader.
Meanwhile, BJP has also initiated talks on the issue within the party.
Most BJP leaders are in support of joining hands with Sena as this will not only lead to the stability in the BMC but will also strengthen the Fadnavis Government, says a senior BJP leader. Union Minister Nitin Gadkari has already suggested that both the parties must burry the animosity and join hands again. However, BJP Spokesperson Madhav Bhandari says, “It was Shiv Sena who broke the alliance. Now, they have to take a call whether they wish to come together again.”

Of the other players, NCP has decided to wait and watch and while the Samajwadi Party wants to sit in the opposition. “Those responsible for Mumbai’s problems are fighting one another for power. SP will not help them in any form. We will sit in the opposition and represent Mumbaikars,” said Rais Shaikh, party leader and corporator. 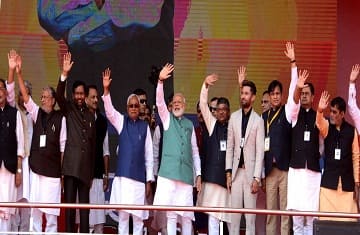