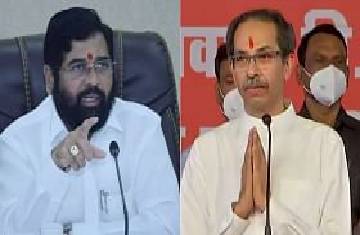 The Uddhav Thackeray faction has petitioned the Supreme Court against the Election Commission's (EC) proceedings on the petition of Maharashtra Chief Minister Eknath Shinde's camp for recognition as the true Shiv Sena and their claim to the party symbol, the bow and arrow. The development is significant, especially since the EC has requested that rival factions submit documents supporting their claims to the symbol by August 8.
According to the Uddhav Thackeray faction, the EC cannot determine the true Shiv Sena until a decision on disqualification of rebel MLAs is made. "If the EC is allowed to proceed with the proceedings initiated by it on July 22, it will not only precipitate issues of great Constitutional import pending before this court, but it will also cause irreparable injury to the applicant as any proceedings before the EC relying on the petition of persons whose status as legislators is itself in question before this court will not be just and proper," it said in its petition.
According to the Uddhav Thackeray faction, the Eknath Shinde camp has engaged in several illegal activities that violate the Shiv Sena's constitution. "Furthermore, such proceedings would be in contravention of settled law that an inquiry into a matter which is sub-judice before the court amounts to interference with the judicial proceedings and, thus, amounts to contempt of the court," the petition states.
The Uddhav Thackeray faction urged the EC not to proceed with the Shinde camp's petition due to the pending status of several petitions in the Supreme Court. The petition characterises the rival Shinde group's request for the poll symbol and the Shiv Sena's real name as "desperation." The Uddhav Thackeray faction had filed its representation with the EC after the Shinde camp had written to the poll panel requesting that the party symbol be assigned to it, citing their recognition in the Lok Sabha and the Maharashtra Assembly.
Image Courtesy: Twitter @themaktab