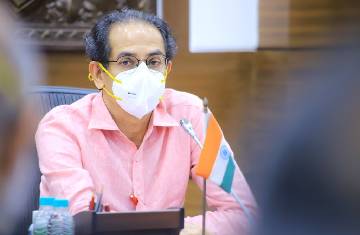 Anguished Chief Minister of Maharashtra Uddhav Thackeray, slammed the opposition leader who is giving a visit to the areas affected by flood in the state of Maharashtra stating that false promises would not be made by him even if he is being criticised.
The Chief Minister after hearing allegations from the big leaders of Bharatiya Janata Party (BJP) including Devendra Fadnavis, has made this statement. The Bharatiya Janata Party (BJP) leader and former Chief Minister of Maharashtra Devendra Fadnavis alleged that no relief package has been given by the state government to the farmers affected by flood in parts of Marathwada and Vidarbha.
The statement from Chief Minister Uddhav Thackeray came on Tuesday while he was in a workshop for discussion on the state budget and understanding for further making any decisions. He further stated that before announcing any relief package after the occurrence of a natural disaster, the state government has to look at their treasury.
“The natural disasters which hit, not only hit the villages but also the state’s economic situation and we are taking a way out for it. Sometimes I feel that things should be given but my nature is not giving false promises that I can’t fulfil, will never do such a thing ever. And I don’t even mind if I am being criticised for behaving like this,” stated Chief Minister Uddhav Thackeray.
Further, he stated that there are two parts of any disaster, first is visiting the spots and comforting people the other is getting information about how much help can be provided to the needy and then give the relief. The regular visits of Bharatiya Janata Party (BJP) leaders like Pravin Darekar and Devendra Fadnavis in the flood-affected areas is a way they are targeting the Maha Vikas Aghadi (MVA) government ruling in the state of Maharashtra ahead of the Brihanmumbai Municipal Corporation elections to be held in 2022.
Image Courtesy: Twitter @CMOMaharashtra