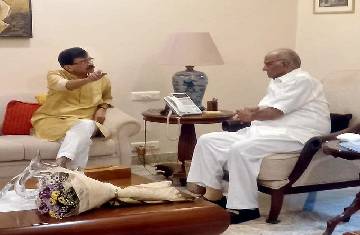 A day after his release, Mr. Sanjay Raut, a Shiv Sena Uddhav Balasaheb Thackeray MP, visited Mr. Sharad Pawar and Mr. Uddhav Thackeray at their respective Mumbai homes on Thursday. As he softened his tone and praised Mr. Devendra Fadnavis, the Deputy Chief Minister, eyebrows started to rise. "Maharashtra's new government has made some good decisions as well. We are not going to fight just to fight. He stated, "We have never done that. Devendra Fadnavis made several wise choices. Some choices—like providing affordable housing—are wise, she continued.
He referred to the government of Shinde Fadnavis's decision to grant the Maharashtra Housing and Area Development Authority more rights. "Those rights had been taken away by our government (Maha Vikas Aghadi). Not at all to my taste. He said, "Mr. Fadnavis did well to restore those. Additionally, he stated that he would soon meet with Mr. Fadnavis to discuss some official business. "Additionally, I'll meet with Prime Minister Narendra Modi and Home Minister Amit Shah to discuss my situation. I'd read that Devendra Fadnavis wanted to see less political animosity in the state. I appreciate his assertion "Mr. Raut stated.
Due to a lack of time, the Bombay High Court was unable to hear the Enforcement Directorate's (ED) request to have Shiv Sena MP Sanjay Raut's bail cancelled. On Friday, the matter will be heard, according to Justice Bharti Dangre. Justice Dangre refused on Wednesday to revoke Raut's bail in the alleged money laundering case, stating that she could not make such a decision without hearing the opposing side. After the special PMLA court on Wednesday granted release to Raut and his close aide Pravin Raut, the ED went to the HC to request that their bail be revoked.
Image Courtesy: Twitter @fpjindia