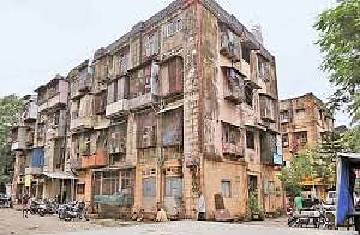 According to officials, the Centre has rejected the Maha Vikas Aghadi (MVA) government's plan to renovate the century-old eyesores known as British Development Department (BDD) Chawls in Sewri, which are located on Mumbai Port Trust (MbPT) land, setting the stage for yet another confrontation.
On June 3, the union minister Sonowal sent a letter to Arvind Sawant, the MP for the Sewri Constituency, rejecting the proposed redevelopment. The letter is titled, "The Mumbai Port Trust Authority's proposal for Sewri BDD Chawl's redevelopment was looked at. Currently, there is no enabling clause in any current policy of the ministry of ports, shipping, and waterways that would allow for the implementation of this proposal in its current format. The Mumbai Port Trust has been threatened because of this." The FPJ has a copy of the letter.
As a result of the Union ministry's rejection of the eagerly anticipated Sewri BDD Chawl redevelopment project, Shiv Sena MP Arvind Sawant has now voiced his displeasure with the BJP-led Union government. He stated: "Sewri BDD Chawl's proposed redevelopment has been rejected by the Center. We vehemently oppose the BJP's stance, which denies the residents their legitimate ownership rights over the new homes."
These buildings, which include ground plus three, were constructed in 1922, making this year their 100th anniversary. There are 960 tenements in total where tenants are still residing. However, since there is no indication that any redevelopment will be undertaken anytime soon, these residents are now living in fear, especially during monsoon as the risk of building collapse is greater due to the age of these structures.
One of the tenants and a representative for the Akhil Sewri BDD Chawl Development Project, Mansingh Rane, stated: "With regard to the proposed redevelopment plan for our buildings, the center's response has left us incredibly disappointed. The center's denial of implementing the redevelopment ideas is unacceptable. We are currently preparing to organise a protest against the union minister's statement." He continued by saying that the tenants would hold a meeting the following week to plan the next step. As for the long-overdue redevelopment demand, Rane insisted, "We have been left with no choice but to come on roads and protest against the centre."
Image Courtesy: Twitter @fpjindia