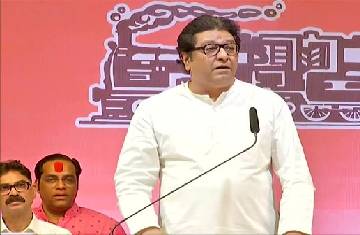 The Raj Thackeray-led Maharashtra Navnirman Sena (MNS) said on Wednesday that the party will run alone in the forthcoming BrihanMumbai Municipal Corporation (BMC) polls, despite developing amity with the BJP and Shinde camp, particularly following the failure of the MVA government in the state. MNS will run candidates in each of the 227 wards, and it is anticipated that the party will appeal to voters on the bases of Hindutva and Marathi manoos. Sandeep Deshpande, a close friend and former councilman of Raj Thackeray, announced MNS' decision to break its ties with all parties.
With this, there will essentially be four parties vying for the label of "Hindutva": the BJP, the Shiv Sena led by Uddhav Thackeray, the camp of Eknath Shinde, and the MNS. In addition, four will make an effort to attract the Marathi manoos, who make up around 27% of Mumbai's population. With its announcement on Wednesday, MNS put an end to rumours that it will team up with the BJP or the Shinde camp. However, the party has implied that it would like to expand its presence in line with the recovery plan and provide Mumbaikars an option.
Deshpande decided to make a formal announcement at a time when several leaders, including the chief minister Eknath Shinde, the deputy chief minister Devendra Fadnavis, the state's BJP chief Chandrashekhar Bawankule, the president of the BJP in Mumbai, Ashish Shelar, and the BJP Minister Mangal Prabhat Lodha, had visited Raj Thackeray's Shivtirth, sparking rumours.
According to Raj Thackeray, the party's leader, MNS will independently run candidates for all 227 seats in the BMC elections. Additionally, the party will run unopposed in elections for other civic bodies, according to Deshpande. We have made the choice not to form an affiliation with any party because we are independent, he continued.
The MNS announcement will compel the BJP, the Thackeray faction, and the Shinde camp to adjust their election strategy in order to get the most support. While the BJP and Shinde camp, which are anticipated to work together, would make every effort to show how their brand of Hindutva is authentic in opposition to the Thackeray faction's move to stray from Bal Thackeray's hardline Hindutva.
The Thackeray faction will present the "fake" Hindutva of the BJP and how it was intended to grab power. The Shinde camp is adamant about getting in touch with voters and reasserting its dedication to the Hindutva ideology promoted by Bal Thackeray and Anand Dighe. Raj Thackeray, however, will remake himself by broadening his appeal beyond the Marathi Manoos card to a more general Hindutva appeal.
Image Courtesy: Twitter @fpjindia