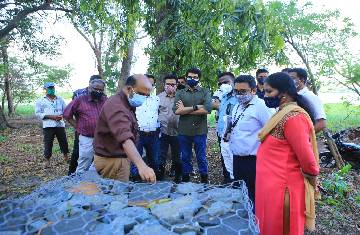 In June 2021, Maharashtra’s Environment Minister Aaditya Thackeray with Brihanmumbai Municipal Corporation (BMC) officials and experts of the environment gave a visit to Mumbai’s Powai Lake to start the work on a 10.2 Km, cycling track. Maharashtra’s Environment Minister Aaditya Thackeray, son of Chief Minister Uddhav Thackeray also holds the position of state tourism minister. He was a part of the recce of the area which joined the lake from where the cycle track passes, took this on Twitter to his three million followers and informed them about his visit to the place.
“As I had requested the Brihanmumbai Municipal Corporation (BMC) and the Maharashtra Tourism Development Corporation (MTDC) and they have also started the work on creating this cycling track, without causing any harm to the flora fauna and keeping it as it is,” stated Maharashtra’s Environment and Tourism Minister Aaditya Thackeray.
He further assured, that this work will not only provide urban open space to the citizens, and the interaction with nature will also be expanded. He ended by tweeting that the Powai Lake was the gem of the Mumbai city as it has beautiful surroundings, and further, every aspect of this approaching track will be eco-friendly.
But still, people have their opinions against this decision of Environment Minister Aaditya Thackeray, it is a mixed community protesting against the minister of residents in Powai, Environmentalists, social activists, students and members of big environmental groups. These protestors along with their placards have asked the minister for protection of the Indian Marsh Crocodiles which are a protected species and inhabit this area. The protestors have raised their voice against the construction of the track alleging that this decision has been taken without any Environmental Impact Assessment (EIA) study.
The protestors, every Sunday gather at Powai lake in the mornings and state their opinions on this step of the city ruling body.
This decision will be of utmost importance as with four month left for the Brihanmumbai Municipal Corporation (BMC) elections 2022 and the pressure is much more than anything on the Shiv Sena over keeping its image intact. As both sides, the Bharatiya Janata Party (BJP) its next opposition has also geared up to win this time.