Devendra Fadnavis scores big with Real Estate and Finance, but Eknath Shinde anticipates holding on to MSRDC and Urban Development 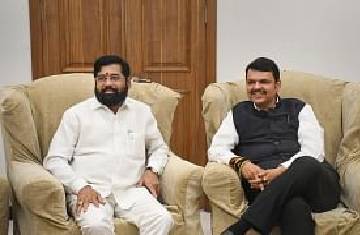 The allotment of portfolios will be announced by Chief Minister Eknath Shinde in a day or two. Urban development, general administration, and MSRDC are set to remain under the control of the CM, while Fadnavis will oversee housing and finances. Shinde, who previously held the positions of both urban development and public works (MSRDC), has already made it known that he will periodically review a number of infrastructure projects undertaken by urban development and public works as well as other organisations such as the Mumbai Metropolitan Region Development Agency, City and Industrial Development Corporation and Maharashtra State Road Development Corporation.
Fadnavis will be in luck because he is predicted to be in charge of the crucial home and finance ministries. The first to speak out against the criminalization of politics has been Fadnavis. As head of the finance division, Fadnavis will work to make Maharashtra an economy worth $1 trillion.
Radhakrishna Vikhe-Patil, a minister for cooperation, Chandrakant Patil, a minister for revenue and public work, Girish Mahajan, a minister for water resources, Vijaykumar Gavit, Minister for Tribal Development, Ravindra Chavan, Minister for Housing, Atul Save, Minister for Public Health, Suresh Khade, Minister for Social Justice and Mangal Prabhat Lodha, a minister for Law and Judiciary.
The ministers from the Shinde camp, on the other hand, are anticipated to receive ministries that the Shiv Sena held in the Maha Vikas Aghadi cabinet. According to expectations, Uday Samant will take over as Minister of Industry, followed by Dadaji Bhuse for Agriculture, Gulabrao Patil for Water Supply and Sanitation, Sandeepan Bhumre for the Employment Guarantee Programme, Tanaji Sawant for Higher Education, Abdul Sattar for Minority Affairs, Deepak Kesarkar for the Environment and Tourism, and Shambhuraj Desai for Excise.
Image Courtesy: Twitter @themaktab