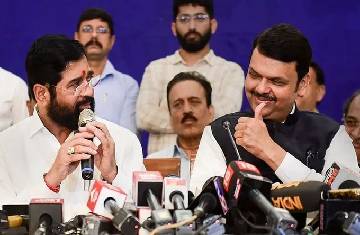 Chief Minister Eknath Shinde and Deputy Chief Minister Devendra Fadnavis will be in New Delhi on Saturday and Sunday even if there is still doubt regarding the cabinet expansion. The pair will take part in the 7th meeting of the Governing Council of NITI Aayog on Sunday after attending the Azadi ka Amrit Mahotsav event on Saturday.
On Friday, Shinde paid a courtesy visit to Fadnavis' official residence, Sagar, in the Malabar Hills of South Mumbai. They allegedly talked about the topics to be brought up at the NITI Aayog meeting, which will be presided over by Prime Minister Narendra Modi, on the eve of their trip to Delhi.
According to reports, the CM and DCM have scheduled several meetings with the top BJP figures, including Home Minister Amit Shah, to discuss the cabinet expansion in addition to these official commitments. They will also talk about the Supreme Court's ongoing legal dispute and possible eventualities in the event that a constitution bench is appointed by the top court.
According to sources, Shinde and Fadnavis would debate portfolio distribution and the number of ministers to be appointed in the first phase with BJP leaders. It's possible that only 14 ministers would initially be sworn in before Independence Day so that they can make the appropriate arrangements in case the cabinet decides to hold a monsoon session after August 20.
The distribution of portfolios is critical because the Shinde camp is anticipated to receive urban development, public works, MSRDC, industry, and agriculture, while BJP is eager to hold key portfolios like home, finance, and cooperation. However, the Shinde camp is vigorously pitching for the energy department, according to the sources.
Image Courtesy: Twitter @AdimulamSweety