According to AAP, BMC's desilting operation is a farce, with only 8% of the work completed 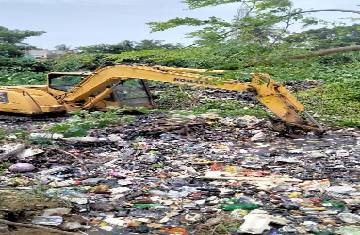 The BMC's desilting activities, according to the Aam Aadmi Party (AAP), are a farce. They claimed that just 8% of the work in the city has been completed and that the civic authority is misleading citizens. "After viewing the rate of construction, it would not be completed before monsoon," AAP Mumbai president Priti Sharma-Menon remarked. She went on to say that contractors and BMC authorities should be charged with an "attempt to murder".
According to AAP, volunteers surveyed rivers, nullahs and stormwater drains (SWDs) in flood-prone areas and discovered no pre-monsoon desilting. The volunteers discovered that the Mithi river is still clogged in places like Jogeshwari, BKC, Bandra East, and Kalina, posing a serious threat to the western suburbs. They claim that even minor nullahs and SWDs are still clogged throughout the city, with the eastern suburbs being the most affected.
"Year after year, the Shiv Sena government has demonstrated full apathy to the death and destruction caused in Mumbai," Menon said, adding, "Their only concern is plundering the BMC and their absolute carelessness in neglecting pre-monsoon planning; it is nothing short of mala fide criminal intent."
She went on to say that it's time to put the "spirit of Mumbai" to rest and bring criminal proceedings against those responsible for the impending floods. The opposition asked that the pre-monsoon preparations be audited by an external independent agency and that those contractors and officers who failed to complete the work or who misreported the data be prosecuted.
Image Courtesy: Twitter @bmcbbsr