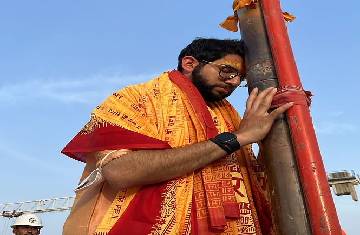 Ahead of crucial BMC elections in which Shiv Sena faces a major challenge from its former ally BJP, Yuva Sena chief and Tourism Minister Aaditya Thackeray visited Ayodhya on Wednesday and sang "Jai Shri Ram" while announcing that Ramrajya will be established in BMC with the blessings of Ramlalla.
This is Aaditya's fourth visit since 2018, but it is clear that the Shiv Sena has not left Hindutva but has split with the BJP, as well as to attract North Indian voters, who make up about 20% of Mumbai's population, in addition to Marathi Manoos in the BMC elections. The BJP has already launched Mission 2022 to defeat the Shiv Sena, while the latter faces an uphill battle to retain power.
Aaditya's visit to Ayodhya also sends a strong message that he will be Shiv Sena's campaign face. This is a significant move because the party wants to broaden its support among young people and the working class. Aaditya is a member of the state assembly as well as the Mumbai Suburban District Guardian Minister, and the party hopes to attract youths primarily because of his innovative thinking and long-term vision for Mumbai's development.
In terms of North Indians, Shiv Sena proposes to spread its wings in order to checkmate the BJP, which enjoys strong support from the former in Mumbai. Shiv Sena sees an opportunity to expand its presence among North Indians, particularly in light of MNS chief Raj Thackeray's decision to cancel his Ayodhya visit scheduled for June 5 in response to BJP MP Brijbhushan Sharan Singh's demand that he apologise to North Indians. North Indians, by the way, have a sizable presence in the Mumbai suburbs, where Shiv Sena plans to focus more attention.
Both the Shiv Sena and Aaditya claimed that today's visit was purely religious and had nothing to do with politics. Shiv Sena senior leaders and party workers from Maharashtra and Uttar Pradesh gathered in large numbers. Aaditya, who had Ramlalla's darshan and attended aarti on the banks of the Sarayu river, stated that a 100-room Maharashtra Sadan will be built in Ayodhya because many Maharashtrians visit there. "Chief Minister Uddhav Thackeray will speak with Uttar Pradesh Chief Minister Yogi Adityanath and will also write to him about the construction of Maharashtra Sadan in Ayodhya," he said.
Image Courtesy: Twitter @fpjindia