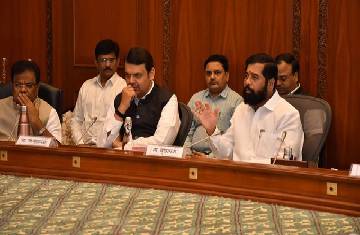 On Monday, Chief Minister Mr. Eknath Shinde declared that the state government fully supports the citizens of the border regions in the ongoing Maharashtra-Karnataka border dispute and announced the appointment of senior attorney Vaidyanathan to represent the parties in the Supreme Court. The CM also announced the appointment of ministers Mr. Chandrakant Patil and Mr. Shambhuraj Desai to coordinate the legal process at the first meeting of the newly reconstituted high power committee on the border issue. He also instructed the administration to strengthen the special cell dealing with border issues so that the benefits of the state government schemes can reach the people.
The CM stated that border regions should continue to receive benefits from both the Mahatma Jotiba Phule Jan Arogya Yojana and the Chief Minister's Relief Fund (State Health Insurance Scheme). Balasaheb Thackeray, the leader of the Shiv Sena, has consistently supported the brothers living in border regions. The state government is working diligently to find a solution to the border problem. Mr. Vaidyanathan, a senior attorney, has been chosen for that. The number of legal experts will be increased as needed.
Devendra Fadnavis, the state's Deputy Chief Minister, on the other hand, stated that "We will meet with the Prime Minister and the Union Home Minister regarding this issue soon."
The CM stated that even though court procedures are ongoing, communication with the Karnataka government regarding Marathi language use in border regions and the amenities needed by those residents should continue.
He declared that the government would provide pensions to the families of border movement martyrs in the same way that it does for freedom fighters. Additionally, the Maharashtra Ekikaran Samiti's fee for pursuing the legal fight will be reimbursed by the state government. The border issue is a very touchy subject. On this matter, Maharashtra's political parties are in agreement. We are dedicated to finding a legal, democratic solution to this problem," Mr. Fadnavis said.
Image Courtesy: Twitter @SanjayJog7