Whose fault is the Pollution from tarballs in Mumbai? 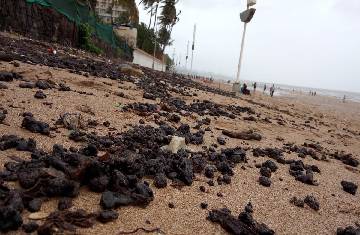 As the problem of tarball pollution on the shores of the city Mumbai rises, officials from multiple government bodies including the Maharashtra Pollution Control Board, and the Brihanmumbai Municipal Corporation (BMC), stated that they do not carry the legalities to look into this matter. After which citizens and experts have said that the problem needs an urgent fix to not let it impact both marine ecology and the health of people.
These tarballs are originated when weathered petroleum is mixed with the debris and sand, these have been showing up on the shores of Gujrat and Karnataka for a very long time. An early study in the year 2013, by the National Institute of Oceanography, stated that tarballs which are found in south Gujrat are linked with offshore drilling rigs in Bombay High.
The second study in 2014, also came to similar conclusions about the tarballs which were found in Goa. The paper stated that the bunker oil and ballast water which is discharged into the open sea may be the reason for the origination of tarballs, the size may vary from a coin to a football.
At the time of the monsoon, the city of Mumbai also notices the tarballs being washed away on the city beaches by the onshore winds and changing currents bringing them to shore. As there are not enough public studies done so far and lack of any response from the Central and State levels, experts can only predict and guess as to where they might come from. However, there is supposed to be an overwhelming anecdotal agreement that the primary source is offshore hydrocarbon exploration by Oil and Natural Gas Corporation (ONGC) at Bombay High Oil Fields.
In response to this issue, the Brihanmumbai Municipal Corporation (BMC) stated that these deposits were being cleaned by them regularly as there was a demand of the citizens. However, they highlighted that they didn’t have any legalities to carry the work forward.
Image Courtesy: Twitter@tweetsvirat