Vinod Mishra, a BJP councillor, has filed a police complaint against Patole for his remarks towards Prime Minister Modi 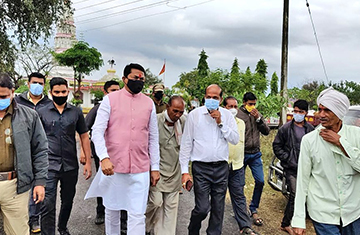 BJP corporator from Mumbai Vinod Mishra has filed a police case against Maharashtra Congress head Nana Patole for his remarks about Prime Minister Narendra Modi. Nana Patole, the Maharashtra Congress Chairman, said on Tuesday that the BJP was protesting his film because it included a "Modi" reference to divert attention away from the real challenges that the people were facing. The video went viral on Monday after a television broadcaster broadcast it and Leader of the Opposition Devendra Fadnavis tweeted about it, despite Patole's clarification that the Modi alluded to in his talk with locals in Bhandara district was not the Prime Minister, but a local goon.

Patole told reporters in Nagpur that the thug he was referring to had been apprehended by Bhandara Police, but the BJP was continuing protesting despite COVID-19 guidelines in order to deflect public attention and vitiate the atmosphere. The Congress understands the importance of the Prime Ministership, and it is the BJP that is tarnishing Maharashtra's reputation with such protests, he added. Patole warned that the Congress' district-level leaders will file complaints against BJP leaders who participated in the protests, which he said were undermining the dignity of the Prime Ministership.