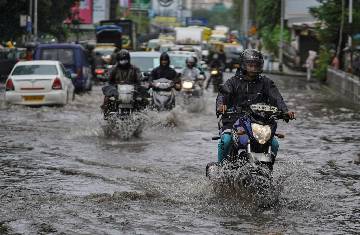 The city of Mumbai on Wednesday recorded 78.7 mm of rainfall in the 24 hours ending at 8:30 am. The heavy rain started to be recorded after 9 pm on Tuesday as a result of the low-pressure zone coming from the Bay of Bengal over the Konkan coast. It is being speculated that heavy rains will shower in the city of Mumbai for another week, as the India Meteorological Department (IMD) placing the city under the green category till September 12.
In the India Meteorological Department’s (IMD) Santacruz observatory, the rain recorded was only 1.8 mm against the predictions of heavy rainfall. “As the weather in the east went blowing more winds, which resulted in heavy rains late Tuesday in the city which passed almost directly to the northern Mumbai. After which the suburbs got more rain than south Mumbai. The low-pressure area travelled in a very short time, because of which there wasn’t any waterlogging or heavy downpour in the city,” stated a meteorologist.
A popular man in the city of Mumbai also known as Weatherman took on social media and stated that the city had a narrow miss on Wednesday morning after making speculations that the city may receive more than 300 mm of rain between September 7 and 8.  In the meantime, Palghar and Thane have been placed below a yellow alert for Thursday.