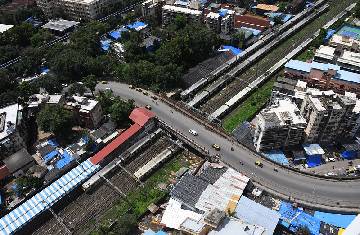 The construction of two bridges along the Anik Panjrapol connecting road in Chembur has been decided upon by the BMC's Roads and Bridges Department. For a total of Rs57.41 crore, the department has received administrative authority to build the two bridges. For a fee of Rs. 80,58,000, the BMC has hired TPF Engineering Private Limited as a consultant for the project.
The Eastern Freeway's Chembur end is close to the Anik-Panjrapol connecting road, which the MMRDA, who built the Eastern Freeway, has turned over to the BMC for maintenance. Two outdated, dilapidated bridges over Mahul Creek are crossed by the connecting road. The Roads and Bridges Department found that it would be challenging to create a new road in the region because the road has also caved in some spots.
As a result, it put out a proposal to construct two flyover bridges. The sewage line in the neighbourhood is sloped incorrectly, according to the BMC's engineers, causing recurrent water logging. Therefore, the civic authority will also install a new sewage line. The BMC has allocated 24 months to finish the bridges. The south-bound bridge would be 50 metres long, while the north-bound bridge would be 100 metres, according to the idea. Each bridge will be 7.5 metres wide and constructed of RCC.
Image Courtesy: Twitter @EmergingMedia17