The process of establishing a unified planning authority for Mumbai is now underway: Aaditya Thackeray 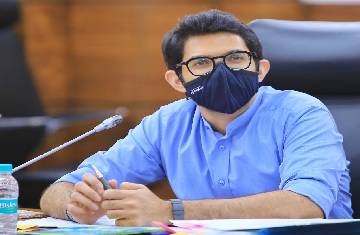 Tourism and Environment Minister Aaditya Thackeray said on Thursday that the government has started the process of establishing a unified planning authority for Mumbai, ahead of the Brihanmumbai Municipal Corporation elections. The planned authority will be led by the city's empowered mayor and will be operational within a year.
Aaditya remarked during an international conference called "Climate Crisis 2.0: Mobilizing Finance for Coastal Cities" that instead of choosing a city CEO, the government is considering giving mayors additional responsibility to ensure the plan is implemented effectively. He explained that having a single planning body for the city will make it easier for the state government to administer and for inhabitants to live. It will promote long-term sustainable development and reduce project execution delays.
He explained that the city currently has 16 different organisations handling 42 different utilities, which makes things complicated.
"Honoured to offer my inaugural address at the Climate Crisis 2.0 conference in Mumbai, where we discussed Maharashtra's ambitions as India's leader in 'Race to Zero' and joint duty as Government, urban local bodies, and Industry leadership toward climate resilience," Aaditya tweeted. He emphasised the necessity for a National Climate Action Council to address climate change at the subnational level.
The declaration by Aaditya came just days after the Brihanmumbai Electric Supply and Transport (BEST) unveiled the National Common Mobility Card (NCMC), which may be used for BEST bus services. Later, the same card can be used to travel by metro, suburban train, bus, taxi, auto-rickshaw and other public transportation. BEST will also launch a premium service that allows users to book bus seats via a mobile app.
Image Courtesy: Twitter @AUThackeray