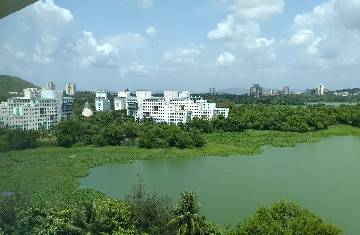 The use of herbicides to clear the growth of water hyacinths in Powai Lake has been strongly opposed by a Mumbai-based environment group on Monday while writing to the authorities. A tender had been floated in August by the Brihanmumbai Municipal Corporation (BMC) to take the water hyacinths out at some areas which include Ganesh Ghat, Pawarwadi, etc to make the areas spacious for all the activities of immersion during the Ganesh Chaturthi.
"After the inquires that had been made by us tells us, that as part of the preparation for immersion of Ganpati, idols the lakes are being cleared to make sure easy and safe immersion of the idols. This exercise is being headed by the Brihanmumbai Municipal Corporation (BMC). This becomes an important step as the lake is a crocodile habitat. But the main point is taking the water hyacinth out, which is being done by a spray of a herbicide on the vegetation," stated Stalin D, Director of Non-Governmental Organisation Vanashakti, in Monday’s letter.
A chemical is contained in herbicides known as glyphosate, which can pose adverse toxicological effects on flora and fauna, moreover on aquatic ecosystems. It also may lead to a possible increase in the water body's phosphorous content, depending on the extent of use. Which will lead to the proliferation of algae and exacerbate eutrophication. The ability of zooplankton can be minimised to reproduce in turn for another biodiversity to thrive.
“This is a request to immediately direct the stoppage of this practice and take all the necessary actions against those who are responsible. This kind of chemical which is very dangerous should not be used in a wildlife schedule," stated Stalin in his letter, to the Maharashtra Pollution Control Board, Brihanmumbai Municipal Corporation (BMC) and the Forest Department. Though it has also been informed that simply taking out these weeds will not be enough to restore the health of the lake.