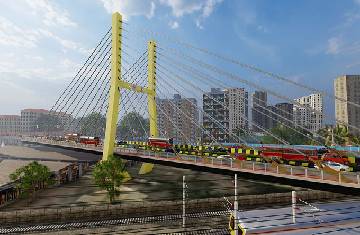 To connect Dadar East and West and run parallel to Tilak Bridge, a new rail overbridge will be built. The Mumbai Municipal Corporation (BMC) will shell out Rs. 374 crores for this. The Tilak Bridge in Dadar is a steel-girder bridge from the British era. The bridge is in terrible shape. The construction of this bridge will shortly begin after Maharashtra Rail Infrastructure Development Corporation (Maharail) has finished the geotechnical work, relocation of utilities on the site, and test pile work.
The bridge will cost BMC 374 crore rupees, according to Additional Municipal Commissioner P Velrasu, and BMC has asked Maharail to build it. Before tearing down Tilak Bridge, a new bridge will be built to prevent traffic problems. In the ensuing 2.5 years, the bridge's construction will be finished. BMC has begun the repair and restoration of the 29 rail-over bridges that are all in a dangerous condition. The Dadar Tilak bridge, which links Dadar east and west and offers important connectivity for traffic from Lower Parel, Prabhadevi, and Worli to the Eastern Express Highway, is one among them. As a result, BMC has made sure that traffic moves without a hitch before the bridge is destroyed.
A new Tilak bridge will be constructed employing cable-based technology, much like the Bandra-Worli sea-link. The bridge will have a total length of 663 metres, and Cable will take up 190 of those metres. The new Tilak bridge will be built parallel to the current Tilak bridge and have a height of 4.5 metres. The new bridge will be 16.7 metres wide and sufficient to support two vehicles at once. There will be three lanes of traffic on either side.
The building of this bridge has started, and Maharail estimates that it will be finished in 640 days. The transfer of the right of way (ROW) by MCGM and Central Railway is necessary for completion, nevertheless. MahaRail intended to build the bridge in two stages because it is a crucial link in the transportation system. MahaRail intends to add unique theme lighting throughout the bridge with selfie points to improve the aesthetic attractiveness of the area in Dadar.
Image Courtesy: Twitter @ankitbs3609