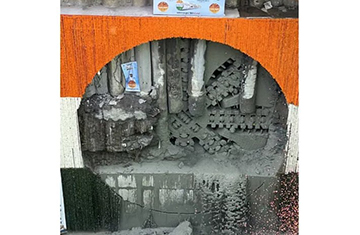 The excavation work of the first tunnel has been concluded by the Brihanmumbai Municipal Corporation (BMC) for the Mumbai Coastal Road from Priyadarshini Park to Marine Drive with the help of India's largest 'Mawla' TBM unit. As part of the 10.58-kilometer Coastal Road Project from Princess Street Flyover at Marine Lines to the Worli end of Bandra-Worli Sea Link, the BMC is building 2.07-kilometer twin tunnels which lie in between Priyadarshini Park and Girgaon Chowpatty, going under Malabar Hill and the Arabian Sea near the coast. The 'breakthrough' in this tunnel mining project happened today at Girgaon Chowpatty.

According to Tourism and Environment Minister Aaditya Thackeray, who was present at the event alongside Chief Minister Uddhav Thackeray, the second tunnel would begin excavation in April 2022. The project is expected to be finished by the end of 2023, just in time for the assembly elections in 2024.

Thackeray lauded his team's efforts towards achieving this. "I really feel very honoured about my staff for their hard work to make Mumbaikars dreams come true, the CM continued, "but it is difficult to make dreams come true."

Thackeray continued, "It is a difficult effort to unite the two ends under the sea." ‘’ According to the CM, who also pledged that the coastline road project will be completed on time, the Shiv Sena-BJP administration built 55 flyovers in Mumbai in 1995, but they are no longer suitable for traffic.

On January 11, 2021, CM started India's largest tunnel boring machine, "Mawla," to build an underpass for the coastal road, kicking off an engineering marvel. "Just a day short of a year later, we witness the fruit of this vision," Aaditya remarked.