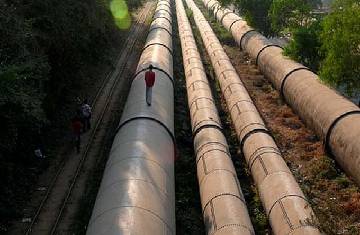 The BMC finished a 3.6 kilometer-long excavation of the first section of the water tunnel from Amar Mahal in Chembur to Trombay in record time. Around 55% of the project has been completed, with the remainder projected to be completed by October 2024. The water supply in the Govandi, Mankhurd, and Chembur regions would then improve, according to BMC officials.
The 5.52-kilometer tunnel begins beneath the Amar Mahal in Chembur and will eventually be extended to the Trombay low and high reservoirs. Last year, on March 6, over a decade after the project's introduction, the BMC began excavation of the first phase of the project. From Amar Mahal to Trombay low reservoir, the first phase of a 3.6-kilometer subterranean water tube excavation was completed. The work was continued uninterrupted even during the pandemic. In one year and two months, the BMC finished the first phase of construction on Friday.
For this project, the BMC has hired M/s. Tata consulting engineers ltd. as the project consultant and M/s. Patel engineering ltd. as the contractor. A tunnel mining machine (TBM) was installed in the Hegdewar garden for excavation work. "The tunnel is being built at a depth of 100 to 110 metres, with a diameter of 3.2 metres. Despite numerous obstacles, the TBM machine was able to excavate 653 metres in record time in January. Simultaneously, the civic authority dug more than 40 metres in one day for the second time.
Image Courtesy: Twitter @fpjindia