The design of the railway segment of the Gokhale Bridge has been approved by BMC, and a work order will be issued by December 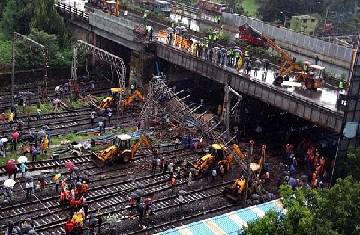 The suggested design for the railway part of the Andheri Gokhale Bridge has finally been approved by the BMC. On Saturday, the civic organisation promptly floated a tender for the reconstruction of the bridge. The work order would be issued by the first week of December, and the bridge's projected cost is roughly Rs 84.72 crores. Following a political intervention, it has been agreed that Western Railways (WR) will be responsible for demolishing the railroad part of the bridge. Therefore, the BMC has expedited the process of rebuilding the bridge.
The city administration has determined that a new bridge would be built concurrently at a workshop while the existing structure is demolished at the site to save time. It will take six to seven months to build the bridge, and it will be a prefabricated construction built in a workshop, according to the Additional Municipal Commissioner (Projects), P. Velrasu. The official stated that the freshly constructed building would be transported from the workshop to the site after the bridge was finished. The Gokhale Bridge's girders will then be put together and launched. By May 2023, the pre-cast material will be put together on-site, enabling us to open at least one arm of the bridge ahead of the monsoon.
As part of the project, existing ROBs and buildings will be demolished, and a railroad span that is 90 metres long and 13.5 metres wide will be rebuilt on both sides. Eight months, including the monsoon, will make up the contract time. In order to prevent disruptions to utilities and pedestrian traffic, the contractor will need to barricade the area before beginning the construction work. While this is going on, it will take about four months to finish the bridge's demolition.
In addition to reconstructing a railroad span on both sides of a 90-meter-long, 13.5-meter-wide span, the job involves demolishing existing ROBs and  buildings. Eight months will make up the contract's duration, including the monsoon.
The contractor will need to barricade the area before beginning the work, and warning signs should be put in place to prevent disruptions to utilities and pedestrian traffic. The demolition of the bridge, meanwhile, will take about four months to accomplish. The Gokhale Bridge will not be finished until September 2023; however, the BMC hopes to have one side of the bridge accessible to traffic by May 2023. As of November 7, when it was deemed hazardous by the consulting company chosen by the BMC, the bridge is closed to automotive and pedestrian traffic.
Image Courtesy: Twitter @themaktab