The Bombay High Court has issued notices to the Maharashtra Government, MMRDA and BMC about the protection of transplanted trees 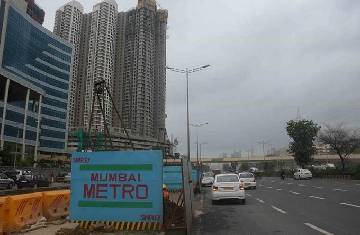 While hearing Public Interest Litigation (PIL) filed by an NGO, Shivtej Foundation, the Bombay high court issued notice to the Maharashtra Government, Mumbai Metropolitan Region Development Authority, Brihanmumbai Municipal Corporation, and others on May 6.
The PIL, which was filed last year, requested that the appropriate authorities issue orders protecting trees that were transplanted during the Mumbai Metro 7 project. The petition also asks for orders to replace the trees killed for the project with compensatory trees.
Line 7 of the Mumbai Metro system runs for 16.495 kilometres from Dahisar East to Andheri East. From Dahisar to Andheri, it is elevated and has 14 stations. "The other worry highlighted by the petitioners is that compensatory plantation of trees is not performed as per restrictions mentioned in the licences given for falling tree," a division bench comprising Chief Justice Dipankar Datta and Justice VG Bisht wrote in their decision when issuing the notices.
According to the PIL, the NGO's workers visited many planted areas in 2019 to see if the trees were being properly cared for. However, they were astounded to see that none of the trees had been properly cared for and treated as prescribed in the standard protocol. The MMRDA allegedly did not provide updated information in response to an RTI, according to the plea.
The court has stated that the authorities must respond to the claim in the PIL that compensatory tree planting is not carried out in accordance with the requirements stated in the licences issued for tree felling. The PIL further claims that the actual number of trees harmed by the Mumbai Metro Line 7 project is more than 800 and that when compensating trees are included, the total number of trees affected rises to 3,000. MMRDA was granted permission to cut 31 trees, transplant 39 trees, and plant 23 trees for the Metro Line 7 in December 2016. According to the PIL, authorization was later granted to remove further trees.
Image Courtesy: Twitter @fpjindia