The 12 Congress Ministers in the MVA government not working in the party's best interests and are unable to keep pledges made in manifestos: AICC member 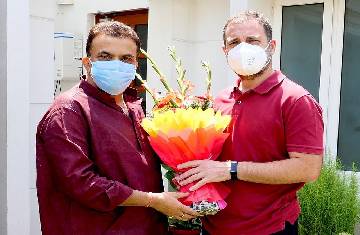 Vishwabandhu Rai, a member of the All India Congress Committee (AICC) from Mumbai, wrote a letter to Congress President Sonia Gandhi on Tuesday, alleging that 12 Congress ministers in Maharashtra's Maha Vikas Aghadi (MVA) government are not working in the party's "true interest" and that "no major steps have been taken to fulfill the promises made in the manifestos." Rai wrote in the letter, "The Maha Vikas Aghadi (MVA) government has 12 ministers from the Congress quota. These 12 ministers, on the other hand, have done nothing to help the party's base in the state. They're all striving for their gain." He went on to say, "Former Congress President Rahul Gandhi promised to provide Mumbai citizens with dwellings up to 500 square feet under the SRA scheme in 2019.

The Ministers of Congress have taken no steps to fulfill this commitment. Chief Minister Uddhav Thackeray, on the other hand, is taking full credit for the tax exemption for homes up to 500 square feet in Mumbai. The manifesto of the Congress party is utterly disregarded." He claimed that the NCP, a coalition partner in the MVA administration, had kidnapped 18 Congress councillors and turned them into NCP members. “With this, there are more and more people from the Congress Party who are joining hands with the Nationalist Congress Party (NCP) and Shiv Sena, which a coalition partner in the Maha Vikas Aghadi (MVA) government in the state of Maharashtra,” he ahead stated that Congress’s Rahul Gandhi’s request was denied for holding a rally in the state.

“For the upcoming Brihanmumbai Municipal Corporation (BMC) election 2022, the Mumbai Congress unit president is looking forward to partnering with Shiv Sena. There isn't any readiness to fight the election on one's own. The Mumbai Congress president appears to have a working relationship with the Shiv Sena "Rai said. He reported that the Congress party had offered to cover Maharashtra's electricity cost.