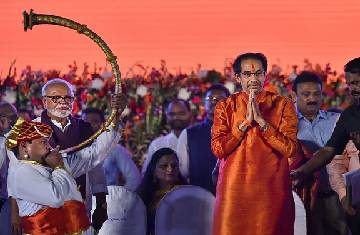 The Thackeray side is sure that their annual Dussehra rally will take place at Shivaji Park even though MMRDA rejected its request while accepting the Shinde camp's application for hosting a rally at the BKC venue. The Thackeray group has already started a social media campaign, pushing Sainiks to attend the Dussehra demonstration at Shivaji Park on October 5 in huge numbers.
The Shinde camp was permitted by MMRDA to stage a rally on an unreserved plot in BKC. Shiv Sena's plea, however, was turned down because of the claim that the land for which it had requested approval was a reserved one. The Shinde camp, on the other side, has asserted that Chief Minister Eknath Shinde will speak at the Dussehra gathering at Shivaji Park. The Shinde camp has also submitted an application for Shivaji Park. However, the BMC has not yet granted permission to any camp to stage the rally at Shivaji Park, also known as Shivtirth. Both applications are still being processed by BMC.
Shiv Sena MP, we don't have a group; we are the Shiv Sena, declared Arvind Sawant. The Bharatiya Kamgar Sena submitted an application to obtain approval for the BKC grounds. I now know that MMRDA has given the Shinde group permission to stage a Dussehra rally at BKC Ground. Shiv Sena is entitled to receive consent from the BMC for staging the Dussehra rally at Shivaji Park if the MMRDA used the criteria for the first cum first basis because we submitted the application first.
Sawant asserted that the Shiv Sena would obtain approval from the BMC to stage a demonstration for Dussehra in Shivaji Park. Although permission to have a Dussehra celebration at Shivtirth has not yet been granted, it has also not yet been rejected. Therefore, if we are denied permission, we shall decide what to do next. We will undoubtedly receive approval for Shivtirth," he added.
Image Courtesy: Twitter @SanjayJog7