Temperatures in Mumbai have risen, with warmer weather expected in the next few days 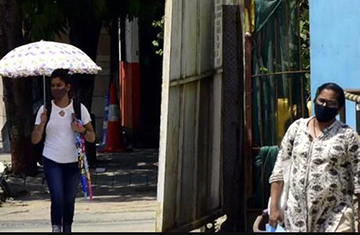 According to the India Meteorological Department's (IMD) station in Santacruz, the city experienced a noticeable increase in daytime temperatures on Sunday, with the afternoon's maximum reading settling at 32.4 degrees Celsius. This was an increase over the previous day's high of 31 degrees Celsius, and it was Mumbai's warmest day since January 5, when the afternoon temperature reached 31.5 degrees Celsius. Warmer weather is expected after January 14, according to the IMD. After at least a week of below-average temperatures prevailing due to mild, unseasonal rain in the city around January 10, followed by the transit of cold air from north India, which is currently experiencing peak winter, Sunday marked the second consecutive day of 'normal' temperatures.

The jump in temperature was attributable to the scuttling of winds, according to officials. "For the previous week, winds have been blowing from the north or northwest, causing a very chilly period in Mumbai beginning around January 10, when the morning temperature dropped to 13.2 degrees Celsius. On Sunday, though, the winds were blowing from the northeast, bringing warmer air with them. Also, the sky was significantly brighter, allowing more sunshine to penetrate," stated a representative from the IMD's regional forecasting centre in Mumbai.