Schools reopen, but no spike in Covid 19 cases as of now: BMC 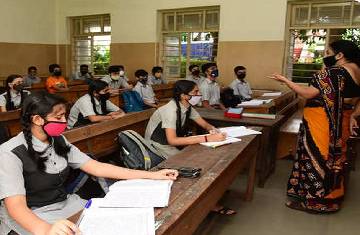 As the Covid 19 cases in the city of Mumbai, reported a downfall the Maharashtra government slowly and steadily permitted for resuming physical classes for students from 8 to 12. Now at present, it has been more than two weeks that the physical schools have resumed for students and as per the data released, there has not been any spike in the number of Covid 19 cases in the city of Mumbai.
Though the city of Mumbai has recorded a downfall in the number of Covid 19 cases, as per the data a total of 1,024 cases were reported from September 14 to 30 in the age group of 0-19 and soon it went down to 732 in October. The schools were permitted to resume their operations from October 4th for classes 8 to 12, with that colleges were also permitted to resume from 20 September, but the timing for colleges have been asked to frame in such a manner that social distancing is followed and all students and staff members have also been asked to remain fully vaccinated.
As per the Brihanmumbai Municipal Corporation (BMC) officials, there has been no rise in cases as of now, but still, it is being speculated of a possible rise in Covid 19 cases, and the officials stated that it would be too early to state that further more there will be no more cases of children and adults.
A recent SERO survey in July conducted by the Brihanmumbai Municipal Corporation (BMC) on the pediatric population revealed that above 50 percent of the pediatric population in the city of Mumbai had antibodies against the Covid 19 virus. The survey was conducted by the Brihanmumbai Municipal Corporation (BMC), in a way to be on a safer side when speculation of a possible third wave hitting the pediatric age group started to come up.
Image Courtesy: Twitter @VarshaEGaikwad