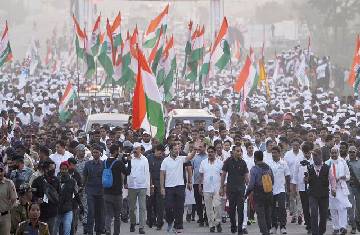 Following the completion of the Maharashtra leg of the Bharat Jodo Yatra, Congress MP Mr. Rahul Gandhi addressed a special message to the state's residents, attacking the BJP and alleging that its policies, which concentrate wealth and power in the hands of a select few, are the primary cause of distress. The objective of these individuals is to use caste, language, culture, and religion to pit Indians against one another, Gandhi continued.
We heard from farmers in Maharashtra whose long-standing misery has gotten worse recently as a result of increased costs, volatile prices, and the inadequacy of insurance programmes to help farmers during bad years. We also heard from young people in Maharashtra who are concerned that despite their hard work and sacrifice, they won't be able to find employment that fulfils their aspirations. Adivasis, the original residents of our nation, the battle for their rights every day, according to Mr. Gandhi, despite laws that are supposed to protect them.
But he emphasised that Maharashtra's rich progressive tradition is opposing this agenda. It is still active, with a number of devoted civil society organisations and progressive writers, performers, and filmmakers. We are appreciative of their unwavering support for the Yatra and the way they have expanded our knowledge and creativity. We also acknowledge and appreciate the media's involvement.
The Buldhana district, where Chattrapati Shivaji Maharaj's mother Rajmata Jijabai was born, is where the Bharat Jodo Yatra is departing from today. It is an honour for us to be inspired by them as well as the outstanding saints and social reformers from Maharashtra, including Shahuji Maharaj, Jotiba and Savitriba Phule, Ahilyabai Holkar, Babasaheb Ambedkar, Shirdi Sai Baba, Gajanan Maharaj, and many others. These great people have promoted social justice, equality, and fraternity for centuries. We are humbled to be following in their footsteps, and this is also the message of the Bharat Jodo Yatra, said, Mr. Gandhi.
Image Courtesy: Twitter @SanjayJog7