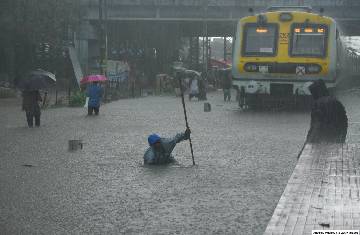 The Central Railway is speeding its efforts for pre-monsoon cleanliness with only a fortnight to go. On Tuesday, the division convened a joint meeting with BMC to discuss the matter. According to railway sources, the conversation was on cleaning trash along rail tracks, with an emphasis on areas near the Mithi River.
On Tuesday, Additional Municipal Commissioner P. Velarasu conducted a coordination meeting with railway authorities at the BMC headquarters, with the primary goal of tackling waterlogging issues between Kurla and Matunga and Chunabhatti stations. "We discussed the necessity to clear muck from the nallahs (gutters) that join the Mithi River between Kurla and Sion. We will also install two more 1,000 horsepower pumps to drain water from the tracks "a Central Railway official added
The train tracks in Sion, Matunga, and Kurla are shaped like a saucer, allowing water to gather in the event of heavy rains or flooding. When water outside rail premises begins to enter during heavy rains, these floodgates will begin to close. Work on an RCC box drain using micro tunnelling is also underway in Matunga, which will run parallel to the Matunga Rail Workshop until it reaches Dharavi.
The Mithi River shares a border with the rail lines that run along this route. This puts it vulnerable to flooding, particularly when it rains hard. According to the BMC, the capacity of dewatering pumps on railway tracks would be increased. On both the Central and Western Railways, a total of 28 pumps will be erected. The railway authorities have been asked to finish pruning 90 trees and cleaning drains and culverts beneath the rail tracks.
The BMC will install high-pressure pumps in 18 locations on the Central and Harbour lines, as well as 10 locations on the Western line, this year. The BMC official claims that "these pumps would help minimize waterlogging and quick pumping of water on railway tracks after heavy rains."
Image Courtesy: Twitter @bbcweather