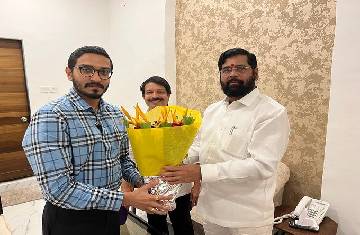 Shiv Sena leader Uddhav Thackeray suffered a new setback in the current conflict when his nephew Nihar Thackeray on Friday expressed his support for Maharashtra Chief Minister Eknath Shinde, who asserts to speak for the true Shiv Sena. Nihar's action is being interpreted as symbolic because it came from within the Thackeray family. The late Bindumadhav Thackeray, the eldest child of Sena founder Bal Thackeray, is the father of Nihar. Bindumadhav was a filmmaker who tragically passed away in an accident in 1996.
Nihar will begin his political career under the direction of the CM, according to a statement from Shinde's office issued after the meeting. Nihar, who has shied away from politics for so long, is wed to Harshvardhan Patil, a former State Minister for the BJP.
Nihar was never involved in state or local politics or the Shiv Sena, but Shinde was successful in weaning him away and thereby infiltrating the Thackeray family. Nihar might be tasked with strengthening the party's young branch even further.
Nihar made his decision two days after Uddhav Thackeray said in an interview with the party mouthpiece Samana that the rebel lawmakers were like rotten leaves and that the plot to overthrow the Maha Vikas Aghadi government was conceived while he was being treated for two major surgeries and recovering from them.
Furthermore, Nihar's decision to formally enter politics occurred just days after Nihar met Shinde and received good wishes from Bal Thackeray's daughter-in-law Smita Thackeray. She was the first member of the Thackeray family to meet Shinde, but she opted not to offer any commentary on the current political events. Eknath Shinde is an elderly Shivsainik who has been appointed chief minister, and I came here to congratulate him, she countered.
Image Courtesy: Twitter @SanjayJog7