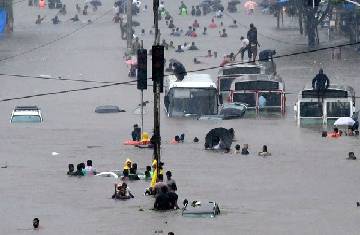 Brihanmumbai Municipal Corporation released a notification on Saturday stating that Mumbai and its outskirts will witness light to moderate rain with the probability of infrequent heavy spells. According to the Mumbai weather forecast, high tide will start today from 14:34 hours where waves will rise to 4.22 meters whereas the low tide would begin at 20:36 hours where waves of 0.53 meters in height would be seen.
In addition, the update by BMC stated that the average rainfall that parts of the city have faced in the last 24 hours stretches between 11.95 mm to 21.64 mm. Central Mumbai witnessed 11.95 mm of average rainfall. Whereas, the eastern and western suburbs received 15.91 mm and 21.64 mm of rainfall, respectively.
It is observed that high tide during the rainy season makes it difficult When there is a high tide during the rainy season, it becomes difficult for the flooded water to sink in whereas low tide facilitates floodwaters in the city to find a passage to get in the seas.
According to the India Metrological department’s forecast, various remote places in Maharashtra will also witness heavy rainfall. As per IMD’s website, the maximum temperature is said to stand at 30 degrees and the minimum at 25 degrees. The rain forecast and the temperature forecast is most likely to remain the same for the next 48 hours.