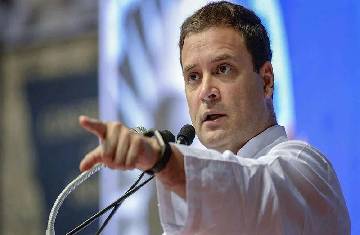 Rahul Gandhi, who is currently participating in the Bharat Jodo padayatra, is being asked by the Maharashtra Pradesh Congress Committee (MPCC) and the Mumbai Regional Congress Committee (MRCC) to be elected as the head of the All-India Congress Committee. The resolutions were passed on Monday at separate meetings. Both of these resolutions were passed a few days after those in Rajasthan and Chhattisgarh called for the promotion of Rahul Gandhi to the party president.
These decisions were expected because every member agreed during their statements that Rahul Gandhi is the nation's leader, guiding the ordinary man with aggression and courage. Former Chief Minister Ashok Chavan proposed the resolution at the MPCC meeting, while former minister Chandrakant Handore seconded it. The motion was proposed during the MRCC meeting by president Bhai Jagtap, and it was backed by Sanjay Nirupam, a previous head of the city unit.
The now-defunct G23 group's previous Chief Minister, Prithviraj Chavan, reportedly did not raise his hand when the motion was passed during the MPCC meeting. Rahul Gandhi should submit his nominations, said Chavan, and the party presidential election must go place. Rahul Gandhi's unanimous election as Congress president has been disputed by Chavan as a result. Chavan wished to introduce a resolution thanking interim president Sonia Gandhi for granting their demand to hold the party's presidential election in accordance with the party's constitution, which was made by them and other G20 members. But he was unable to do so.
Senior MRCC official: "Rahul Gandhi has been speaking out against the unjust and populist policies of the Modi administration. He has been criticising the BJP-led central government for failing to take meaningful steps to reduce unemployment and inflation. He has frequently taken the lead in the delegation by travelling. Rahul Gandhi should therefore be chosen to serve as the AICC president in the current environment in order to lead the party."
Another resolution was approved by the MPCC allowing the AICC President to choose the representatives for the All-India Congress Committee, State President and State office-bearers. The MRCC approved a similar resolution. In the meantime, Chavan met with the party's Maharashtra in-charge, HK Patil, along with former ministers Sunil Kedar and Vijay Wadettiwar, and  demanded that the state unit chief, Nana Patole, be immediately replaced and that former Chief Minister Ashok Chavan be named the new chief for the revival of the party in Maharashtra.
Image Courtesy: Twitter @SanjayJog7