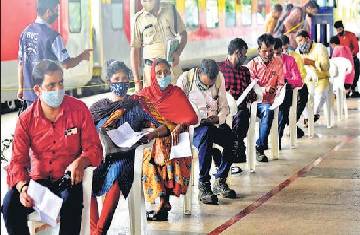 After the city of Mumbai recorded a decline in Covid 19 cases in August, now it records a rise in new cases. The number of sealed buildings in the city is increasing every passing day, which indicates that the most affected are the middle-class localities than the slums and chawls, which is mostly the house working-class population of the city Mumbai.
As per the data released by the Brihanmumbai Municipal Corporation (BMC), the number of sealed buildings in the past two weeks has been increased by around 43 percent, but there has not been an increase in the containment zones in the past two weeks. As per the protocol set by the Brihanmumbai Municipal Corporation (BMC), any chawl or slum will be declared as containment zones when there are more than five cases reported and in the case of buildings, if the building reports 5 or more than 5 cases, it will be sealed. And in case of one to four cases reported, only that particular floor of the building will be sealed.
The data of the Brihanmumbai Municipal Corporation (BMC) states that on August 22, a total of 22 buildings and 1,089 floors were sealed. This number has risen to 50 on September 8, this number is in case of sealed buildings and the number of sealed floors is at 1,564. The areas where there are highest sealed buildings include Andheri, Vile Parle, Khar, Santacruz, Bandra, Malabar Hill, Grant Road.
The total number of cases recorded on Thursday in the city was 457 and two deaths, which took the tally to 7,33,896 and toll to 16,006. According to the State Health Department, 13,709 duplicate cases were removed from the overall cases which led to a dip in cases. As the Ganesh Festival approaches, the vaccination drive in the city will remain shut and will resume on Saturday.