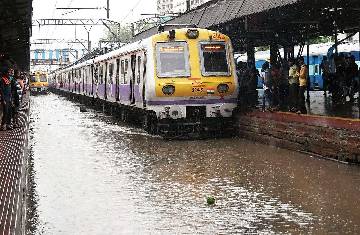 Local train services in Mumbai were paused between Kurla and CSMT line as due to heavy rainfall, the water started flowing over the railway tracks. The train traffic was stopped around 9:50 AM as a safety measure to avoid any accident. The PRO of the central railway confirmed that as soon as the water decreases on tracks, the traffic will resume.
Mumbai is witnessing heavy rainfall since last night. A warning was issued by IMD for heavy rainfall in Mumbai, Raigad, Thane, and Konkan regions from June 9 to June 12. The local train services in the city are operational only for the medical and essential workers as per the new guidelines. The final decision on resuming the services for the general public will mostly be taken next week, Said the Mumbai Mayor.